How this screenwriter and fiction author still exposes her own vulnerability in writing fiction.

Today’s Invisible Stories guest is author, screenwriter, producer, director, actor, and journalist, B. Danielle Watkins. She is an international award-winning filmmaker, and creator of LGBT focused web series. She is also a professor of writing. B. Danielle’s novel, The Alyse Diaries, explores the life and death of a young woman struggling with her sexuality.

In this podcast, B. Danielle and I talk about how she drew inspiration from real life when writing her fiction books. B. Danielle tells us about:

B. Danielle Watkins, author, screenwriter, and journalist, was born and raised in Buffalo, New York. Growing up in Buffalo she was exposed to many different variations of the arts. B. Danielle’s love for literature began at a young age. She began writing at the age of 9 starting with poems and short stories. When once asked in an interview “How Did You Become a Writer?” B. Danielle stated “Well to be honest, I have been writing all of my life. I remember winning an award in 4th grade for a story I created for an assignment. I have always had a very active imagination, I guess that’s contributed to growing up in the home alone sometimes you have to play by yourself, and make it interesting. I used to write plays as a child, and then gather the neighborhood kids and practice all day, and when our parents came home from work that evening we would put chairs in the yard and perform like we were on Broadway. In 2000, at the age of 15, I got a poem published in a collection along with ton of other amazing writers. This particular project, however, I never expected or intended for it to ever be shared with the world. The manuscript sat on my computer for three years before I even considered doing anything with it. It was something that I did because my friends enjoyed the story, and I enjoyed their reactions. One of my close friends from New York, who is a filmmaker, read it and encouraged me (well bullied me) to pursue publishing options, and I was abrasive to say the least. As Marsha Ambrosius stated in her song “Lose Myself” “I had a paralyzing fear of facing failure”. But God makes no mistakes, and it sat for three years because I had to mature before I got to this point, and now here I am, not only a writer, but a Self-Published Author.” Her first novel “No Other Man (A Three Part Tragedy)” was released August 26, 2011. Since its release it has been featured on many websites, and received exceptional reviews. With her follow-up novel released an amazing seven months later, entitled “Redeye” sealed her spot among new newest up and coming romance novelist. With the final installment being released one month shy of the year anniversary of the original, Watkins’ fate was sealed as a writer. In May of 2013 she was officially announced as the head of the Creative Writing Department for M.PoWeR Productions LLC, based out of Atlanta, Georgia. Currently, Ms. Watkins is a contributor to the online publication, entitled “The Onyx Edition”, the writer/creator of a new webseries entitled “Sinful Paradise”, the writer of a LGBT based webseries entitled “ten90”, as well as producing her own film entitled “BlacButterflii: The Saigon Ruse Story” as well as producing and directing a short film she wrote entitled “Kisses in the Wind”. With these many projects underway Watkins has proven that being a novelist was just the beginning. She currently resides in Las Vegas, Nevada. She is a Graduate of Winston Salem State University, with a Bachelor’s Degree in Psychology. She is a member of Zeta Phi Beta Sorority Inc. With whom she held many positions, including a state executive board officer for the state of Nevada. 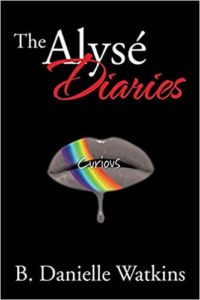 Jenn: [00:09:46] Yeah. What’s the difference or not the difference, but the experience for you, whether you were casting people for a screenplay that you’ve written or you’re writing, is it the same kind of process that [00:10:00] you go through in terms of, of writing about it?

[00:10:03] Like, I guess writing a screenplay versus writing a novel, is that kind of a different experience too, of deciding to what? I don’t even know what I’m asking, like creative liberties. That you’re taking for something you don’t have experience with.

[00:10:21] So we talk about what they look like. We talk about how they present. We, we create everything about them when you’re writing a screenplay. Sometimes that doesn’t always work that way, because if I can say, I want her to look a certain way, but if an actress that looks different does a lot better than the actress that looks like that.

[00:10:43] It makes more sense to go with the added, the better actress, which changes the presentation of the character. Like there are some times you’ll see a movie or something and what that character looks like on screen is not what the writer imagined by far, but there’s a better actor. So it is different [00:11:00] because you can’t write a screenplay with the thought process that this is what this character is going to look like, unless you’re writing specifically for somebody.